In the last decade, through clever use of mechanisms and control systems, researchers came close to perfecting conventional mobile robotic systems made of hard materials. We now have wheeled or legged robots that can navigate unstructured environments, go over uneven terrain, and even perform acrobatic movements. However, most of these robots are quite large and cannot be miniaturized, due to the way they are manufactured and the high power motors utilized. This means that they can only access environments humans already have access to.

Fortunately, important strides are being made in the development of miniature robots. They have many advantages, such as being relatively inexpensive (because their manufacture requires fewer materials), as well as small enough to access confined spaces. On the other hand, one of their major drawbacks is their limited locomotion capability, especially on uneven terrain. Most miniature robots get stuck easily because their height does not allow them to scale obstacles.

Now, researchers at Bilkent University, led by Asst. Prof. Onur Özcan from the Department of Mechanical Engineering, have built a miniature robot that demonstrates an enhanced ability to surmount obstacles. They solved the problem by using body compliance – in other words, “softness.”

“We thought that by making our miniature robots soft, they would be able to exploit this body compliance – just like most biological systems, for example, insects or mice – to go over obstacles,” stated Dr. Özcan.

The untethered miniature soft quadruped, which the researchers have named SQuad, is a palm-size, four-legged robot made mostly of soft materials such as polydimethylsiloxane. It uses four DC motors to rotate its soft, C-shaped legs. In most soft robots, pneumatic actuators are utilized to achieve motion because they integrate very well with soft materials. However, pneumatic actuators need a compressed air source, which often makes the robots bulky and sometimes does not even allow untethered locomotion. SQuad has a design that brings the best of these two worlds together, using soft materials to make a body-compliant robot capable of scaling obstacles, but also utilizing regular actuators, in this case DC motors, to allow miniaturization and untethered locomotion. 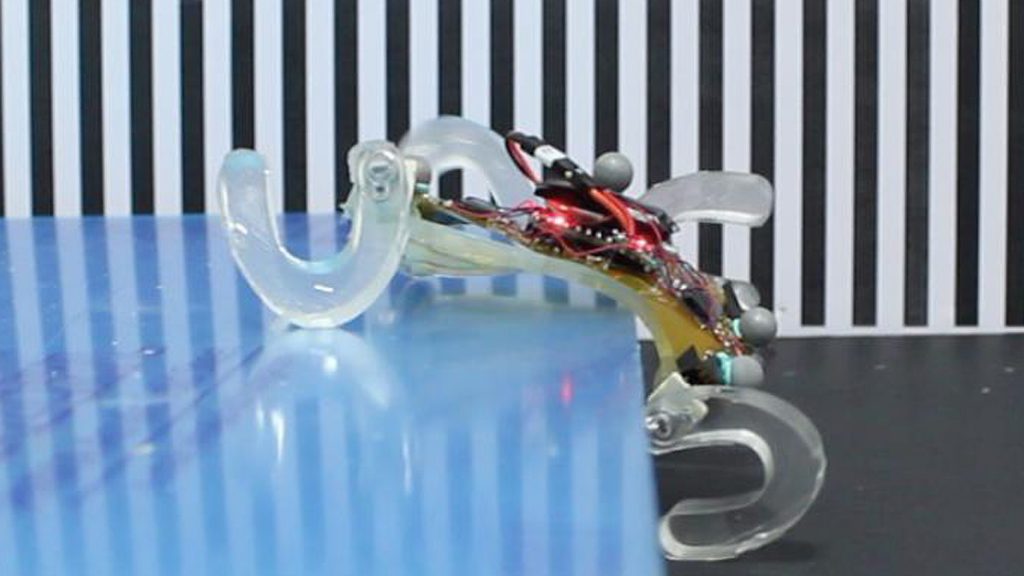 The key result presented in the work is the effectiveness of the soft robot body in scaling obstacles, with SQuad able to go over obstacles 1.44 times its body height. To compare its performance in this respect with that of a more conventional robot, the researchers made an identical robot from hard materials. The hard robot was able to go over only 0.88 times its body height, even though C-shaped legs have been shown in the literature to have exceptionally good obstacle-scaling capabilities. Given the fact that the design of the robots differed only in terms of body compliance, it seemed clear that this feature was what enabled the soft robot to scale higher obstacles.

Contemplating the possible uses for SQuad, Dr. Özcan remarked, “We think that with such an improvement in scalable obstacle height, we can use this robot, with a small camera on board, for inspection purposes or, maybe with a camera or a microphone added, to find survivors under a collapsed building. Our robot’s body compliance and improved obstacle-scaling capabilities should allow it to go through small openings, maybe even smaller than its cross-section, and work on unstructured and uneven terrain such as a collapsed building environment.”

The soft robotics project for which SQuad was built is funded by TÜBİTAK’s 1003 program (project number 216M195).