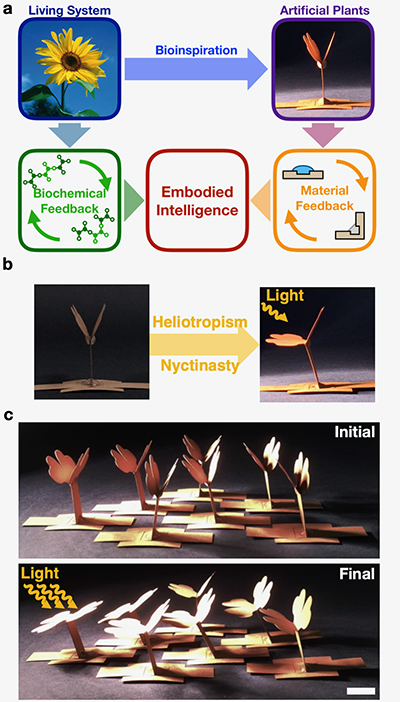 Imagine a world of plant-, animal- and human-like robots no different from living organisms – they respond to stimuli from the environment, work autonomously, self-regulate through artificial metabolism, self-repair when injured.

This might seem like science fiction, since today’s robots are typically rigid, robust machines with “computer brains,” with the transition from machine to organism complicated, if not impossible.

However, the picture changes when you start building robots not with hard parts and electronic circuits, but with elements that nature uses to build its organisms: organic soft materials that operate according to biochemical rules. Very recently, a team of researchers at Bilkent University, led by Asst. Prof. Bilge Baytekin of the Department of Chemistry, has shown that the creation of “soft robots” that act like living organisms is feasible, at least in the case of plant robots. In a recent publication in the journal Soft Robotics (DOI: 10.1089/soro. 2019.0036), she and coauthors S. Doruk Cezan, also of the Department of Chemistry, and Dr. H. Tarık Baytekin of UNAM report the first soft robotic plant that is self-regulated.

Describing the project, Dr. Baytekin said, “The robot plants follow the sunlight at any elevation, maximizing the solar output of the solar cells attached to their leaves. They do it all by themselves, without a battery, without any electronics, without any tether or external control. We (humans) do not interfere; the system is self-regulated through a simple built-in mechanism whose design was inspired by living plants.

“In all organisms, reactions to internal and external stimuli are controlled by a biochemical feedback mechanism. Plants use transpiration to transport water from their roots to their leaves, where it evaporates; we have integrated this into our plant robots. Continuous transpiration regulated by the positioning of the plant leaves creates feedback.”

The group’s simple design of a plant robot, involving nothing more than folded paper cutouts and sugar gels, is sufficient to achieve this complicated behavior, which demonstrates high tracking efficiency. “We wanted our robot to be like living plants, which are extremely energy efficient. Without central controls or motors, they can perform complicated tasks,” noted Dr. Baytekin. Using this approach, her research group succeeded in reproducing two plant behaviors: heliotropism (solar tracking, i.e., turning toward the sun) and nyctinasty (opening/closing up of leaves or petals in the presence/absence of light).

“It’s always exciting to see the autonomous action of a nonliving object,” declared Dr. Baytekin. “However, we want to go beyond ‘magic tricks’ and achieve some useful purpose, which is what robots are intended for. The self-regulated solar tracking of the plants is thus used to maximize the output from their solar panels – a tracking plant has an efficiency boost of 120 percent in comparison to a non-tracking one. This is no surprise; apart from the well-known example of the sunflower, many other plant species are solar trackers. We will continue to get our inspiration from living organisms as we take steps toward building a new kingdom of artificial analogues.”

The Baytekin group leads a pilot project on responsive and self-healing robots within the RoboCom++ consortium, an initiative supported by the EU’s ERA-NET scheme. The Turkey-based part of this European project is funded by TÜBİTAK.